The World of Otome Games is Tough for Mobs Wiki

• Official English Manga Volume 2 has released! You can buy the book at here!

• Official English Light Novel Volume 4 has released in digital! You can buy the book at here!

• Manga Chapter 37 has been released, the next chapter will release on December 2, 2021!

The World of Otome Games is Tough for Mobs Wiki
Register
Don't have an account?
Sign In
Advertisement
in: Article stubs, Characters, Male Characters,
and 5 more

Aaron (アーロン, Āron) is the fourth reincarnated person. He is the one of the new students of Holfort Academy and also one of the capture target in third installement of otome game series.

He had brown hair that grew behind until his shoulder also held in place with a hairband. He was also tall and the sleeves of his uniform were folded up & his shirt was opened at the chest part and the body that could be seen from there was well trained.

He is a sharp thinker and a schemer. He is a womanizer and also cunning man yet selfish and adores himself too much. Upon his reincarnation, as a young student at the Holfort Academy, his old habits came back. He is addicted to sex with a girl by putting her to sleep.[1]

He is now curious and conscious of his beauty and he is stipulated that he wants to make his body more feminine and gorgeous.[2]

During his previous life, he had a wife to whom he always asked for allowances and rough sex. He also had a daughter that he doesn't even care about. He likes to mingle and drink with his peers.

Aaron had achieved success as an adventurer. He received an invitation from the kingdom asking if he wanted to enroll in the academy. At first, he looked down on the offer, but later on, he decided to enroll thinking that a school life wouldn’t be a bad idea. During the welcome party of the scholarship students by Olivia, Aaron, with two more male students, were planning to make her drink and take her to their room. But Cleare made them unconscious before they could do anything. When Olivia found the three of them were asleep, Cleare told her that they were too sleepy after drinking too much, so she should ask the group of students (male only) who were leaving, to bring them to their dormitory. It is implied that he and his friends were raped while asleep, just like what they would have done to Olivia.

First appearance of Ary-chan in illustration 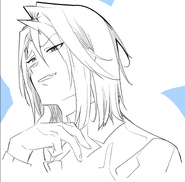 Initial design of Aaron of manga

Initial design of Ary-chan of manga

Community content is available under CC-BY-SA unless otherwise noted.
Advertisement